As part of Stampin' Up!'s 25-year anniversary celebration, they're bringing back some of our favorite stamp images from the last quarter century and combining them into 12 sets, which will released-one set per month-during 2013. Even better, along with some great classic images, each "Best of" set will also include a  never-before-seen image !

Check back here every month to download a flyer for a new Best of stamp set.

Some things to remember:
As a special incentive to collect the Best of stamps, starting in February we're including a collector's card and 25-year proof of purchase sticker with every Best of set. Collect six stickers, and send it in to redeem a FREE set of your choice valued up to $14.95! Free sets must be redeemed no later than April 30, 2014. 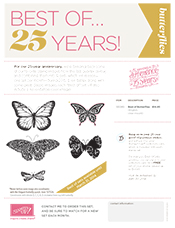